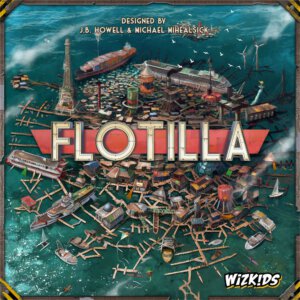 An interesting looking post-apocalyptic strategy game has arrived in stores from WizKids. In Flotilla, players will work both above and below the ocean waves to secure resources and further develop mankind’s final foothold on the planet. The game is for three to five players, ages 14+, plays in around 90 minutes, and carries an MSRP of $79.99.

In 1954, with an explosion over a hundred thousand times more powerful than even the wildest estimates, the Castle Bravo nuclear test obliterated the Bikini Atoll, and ruptured the Earth down to its mantle.

As water levels rose in the aftermath, the remnants of humanity fled their homes and took to the sea. World leadership came together to build a massive Flotilla, mankind’s last bastion of civilization.

Now, ten years after the disaster, the Flotilla is home to the very last of us.

Flotilla features two distinct and interwoven modes of gameplay, as you try to outpace your opponents in bringing prosperity to humanity’s new home. You begin the game as a “Sinkside” Fleet Commander, commissioned by world leaders to explore the new face of the ocean, scour the depths for resources, and rescue any survivors you come across. At any point in the game, you may choose to turn “Skyside,” by selling your skiffs, and leaving your seafaring life behind to now grow the Flotilla itself.

The choice of if or when to switch from a “Sinkside” explorer to a “Skyside” settler defines the very core experience of Flotilla. They represent two similar but distinct game experiences, utilizing the same game components, seamlessly intertwined among all players. If you switch, you’ll flip over all of your accumulated game components, watching your crew grow into new roles with new art for the same characters, while finding entirely new uses for your ocean tiles and resources, and beginning to trade with the “Sinkside” players as you go after new objectives. As players turn “Skyside,” different niches are filled, forever changing the game’s economy. Mastering this ebb and flow will be critical if you’re to shape the new face of humanity!