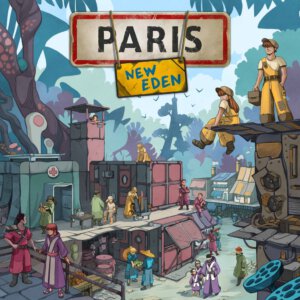 Matagot has an interesting looking post-apocalyptic game set for an Essen release this October. In Paris: New Eden players will compete to improve their strongholds throughout a game year while also aiming to complete secret missions to rebuild the city. The game is for two to four players, ages 10+, plays in around 45 minutes, and will carry an MSRP of $59.99 when it arrives in Q4 here in North America.

The dazzling boulevards and historical monuments of Paris have been enveloped by lush vegetation. The once bustling city hub has been hushed to stillness following an apocalyptic event and your goal is to forge a new future. Equip your shelter, manage your resources, and rally a community of various survivors, all while making your way through the jungle cityscape.

Paris: New Eden features a clever dice-drafting mechanism that allows you to recruit survivors. Over the span of one year, you will endeavor to build your shelter and overcome the array of obstacles that you encounter along the way. The dice allow you to recruit survivors of different types: tinkerers, brawlers, healers, sages, farmers, jacks-of-all-trades, or even useless survivors. At the end of each season, your survivors allow you to bid to improve your shelter. These survivors are recruited in five key areas and central squares of the Paris that we know, each one with different abilities:

Players score points by recruiting survivors and feeding them, by fulfilling objectives from the tower, and by completing secret missions acquired at the bridge. At winter’s end, the player who has accumulated the most victory points wins. The future of Paris is in your hands! 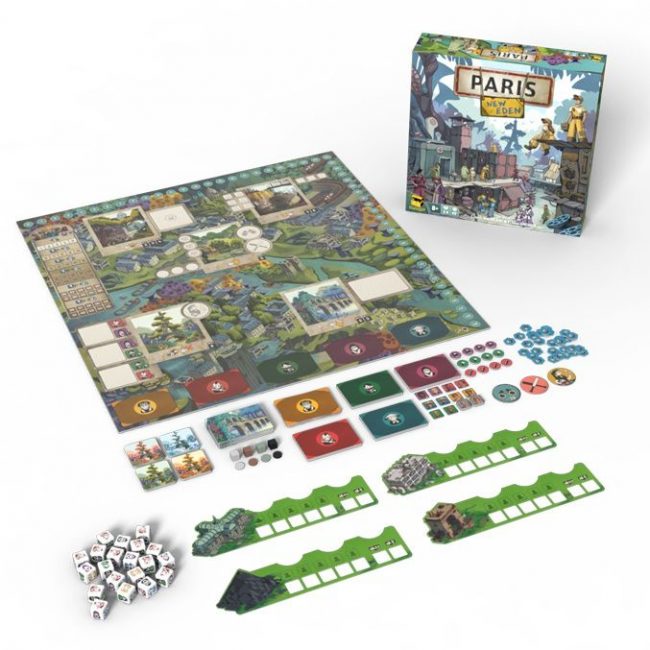