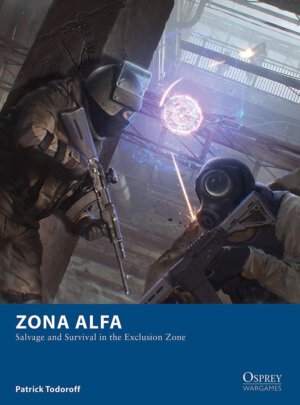 Heading your way at the end of the month is a new post-apocalyptic skirmish level miniatures game from Osprey Games. Zona Alfa takes on Eastern Europe with plenty of scavengers and mutants. The softcover book will carry an MSRP of $20.00 when it arrives January 29th.

Explore, salvage, and survive inside the Exclusion Zone in this near-future Eastern European-themed skirmish wargame.

Zona Alfa is a set of simple, fast-play skirmish rules for scavenging, exploring, and surviving in a near-future, post-apocalyptic Eastern European setting. Players take on the role of bandits, mercenaries, and military units fighting over the blasted Exclusion Zone and its abandoned artefacts.

Customise your fighters with a variety of weapons and specialisms to create your ideal warband. With extended rules for campaigns, character progression, terrain, and environmental hazards, Zona Alfa contains all the tools required to engage in blistering firefights within the Exclusion Zone.