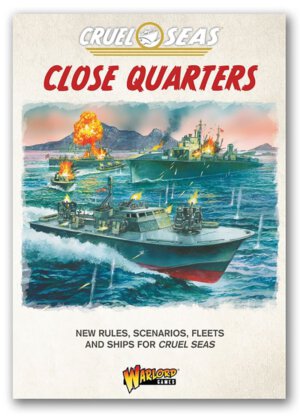 There’s a new supplement for the Warlord Games naval miniatures system Cruel Seas on the near horizon Close Quarters will include new navies and rosters, scenarios, weapons, game rules, and more. The 68 page book carries an MSRP of $32.00, will arrive in late February, and you can pre-order it now.

While gigantic warships stalk the open oceans, engaging enemies over the horizon with their titanic weapons, much smaller craft hug the coastal waters, protecting the land against raids and invasion. Such naval combat was often quick, brutal and decisive.

Brave sailors gun the engines of their smaller, less well-protected boats in order to rapidly close within sight of the enemy and engage them with machineguns, autocannons and torpedoes, raking the enemy boats with bullets or lighting the night sky with explosions. With such visceral close quarter fighting, many crews fought and died on the waves of the unforgiving cruel seas.

This supplement includes eleven new historic scenarios, spanning the seas of this global conflict as well as a random scenario generator. Also included are expanded ship rosters for the seafaring nations and new rosters for the Finnish Navy and Yugoslav Partisan Fleet. New rules for amphibious invasions and experimental Q-ships are presented as well as expanded rules for aircraft and submarines.

These new additions to your games of Cruel Seas will help you turn the tide of battle.

Close Quarters is a supplement for Cruel Seas, the 1/300 scale tabletop wargame of World War Two naval battles. A copy of the Cruel Seas rulebook is needed to use this supplement.

Pre-Orders Have Begun for Second Wave of Judge Dredd Miniatures