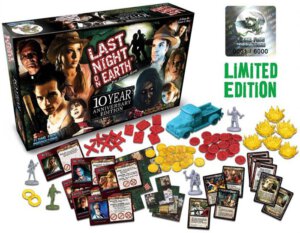 You may have caught some footage in my Gen Con 50 interview with Scott Hill of Flying Frog Productions (plus Scott gives a detailed rundown of what to expect in the box too) and now the Last Night on Earth 10 Year Anniversary Edition is available for pre-order. FFP is looking to celebrate ten years of zombie gaming and the extra large box is loaded with goodies! Right now you can lay claim to one this limited release for an MSRP of $99.95 and expect delivery before Halloween.

Last Night on Earth 10 Year Anniversary Edition is limited to ONLY ONE SINGLE PRODUCTION RUN, when it is gone, it is gone for good. Each copy has a laser sticker on the back imprinted with the unique number of that box in the print run. So, quantities are limited and we expect that this product will only be available for a short time. By purchasing directly from Flying Frog, you will receive two exclusive promo cards with this order.

Last Night on Earth is a fast-paced game of brain-eating Zombies, small town Heroes, and horror movie action. Players take on the role of either the Heroes or Zombies. To survive, Hero players must work together and use their cunning and ingenuity (as well as a bit of luck) to make it through the night, while the Zombie players control unending waves of undead, spreading over the town to feed their hunger.

With a cast of horror movie archetype Heroes and hordes of bloodthirsty Zombies, each Scenario is designed to play out like the plot of a movie; desperate Heroes racing against time to accomplish their goals… sometimes it’s as simple as just trying to live through the night. So put down that popcorn, grab your shotgun, and hide your brain – the Zombies are coming and this could be your Last Night on Earth! 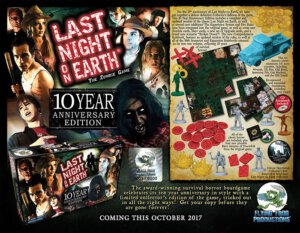 For the tenth anniversary of Last Night on Earth, we have put together a deluxe definitive Collector’s Edition of the game. This 10 Year Anniversary Edition includes a complete and updated version of the classic Last Night on Earth, as well as several new additions! The Experience System and Fire Rules, first introduced in the Timber Peak Expansion, have been integrated into the original game, as well as some new Zombie cards, Hero cards, a new set of Upgrade cards, and a brand new scenario “Broken Down”! We’ve also put together a brand new Comprehensive Rulebook, featuring an updated version of the rules, as well as all of the Web Scenarios and Expansion Rulebooks released so far into one volume, collecting 10 years of survival horror!

This set features plastic miniatures for most counters, including Wounds, XP, Fire, Old Betsy, Spawning Pits, Gas Markers, and even the classic Old Truck! Re-mastered and expanded Soundtrack, including new songs! All of the classic heroes are included, plus four new playable Hero versions of Townsfolk from the original game. Deluxe Numbered Collector’s Box designed to hold your Last Night on Earth collection.