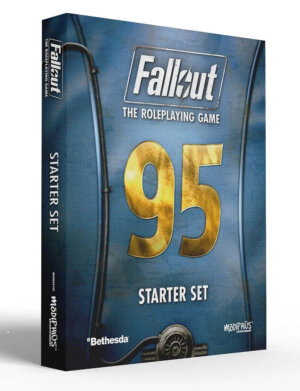 Now available for preorder from Modiphius Entertainment is the Fallout: The Roleplaying Game Starter Set. The set contains everything you need to hop aboard the poplar RPG based on the hit video game series. The boxed set will release in August carrying an MSRP of approximately $29.99.

In 2077, the storm of nuclear war reduced most of the planet to cinders. From the ashes of nuclear devastation, a new civilization struggles to arise. A civilization you will shape.

Will you join with a plucky band of survivors to fight off all comers and carve out your own settlement? Will you team up with pre-existing factions like the Brotherhood of Steel or Super Mutants to enforce your own ideals on the wasteland? Ghoul or robot, paladin or raider, it’s your choice — and the consequences are yours to live with.

Immerse yourself in the genre-defining setting with this introduction to the official Fallout tabletop roleplaying game. This starter set gets you playing Fallout using the 2d20 System designed and tailored for an authentic wasteland experience. Roleplay as a unique character in the familiar setting of the Commonwealth around Boston.

This starter set contains everything you need to begin playing Fallout: The Tabletop Roleplaying Game: