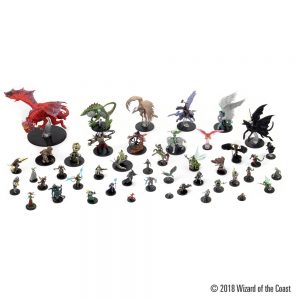 WizKids and Wizards of the Coast have released the latest wave of prepainted Dungeons & Dragons miniatures in their Icons of the Realms line. The Guildmasters of Ravnica series includes 44 miniatures which bring characters and creatures featured in the new RPG supplement. Icons of the Realms: Guildmasters’ Guide to Ravnica Standard Boosters each contains four figures total: 1 Large and 3 Medium or Small figures. There are also two companion starter sets which each contain five minis, total ten figures or one for each guild. Boosters carry an MSRP of $15.99, Bricks of eight boosters $129.92, and the companion starters $24.99.

Ravnica’s vast, worldwide cityscape is a patchwork of grand halls, decrepit slums, and ancient ruins, with layer upon layer of stonework—and guild maneuverings. This set of collectible figures is perfectly suited to represent the machinations of characters and creatures found in the forthcoming Icons of the Realms: Guildmasters’ Guide to Ravnica!

Guildmasters’ Guide to Ravnica contains entirely new pre-painted miniatures like the Deathpact Angel & the implacable Gruul Anarch. The Ravnican guildmasters themselves make an appearance, including the mysterious Lazav and benevolent Trostani. This set also includes several fan favorite creatures, such as Boros Reckoner and the Nightveil Specter!

Collect all 44 figures from Guildmasters’ Guide to Ravnica, the newest set of randomly sorted monsters and heroes in our exciting line of D&D miniatures, Icons of the Realms.