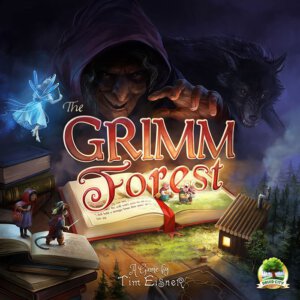 Arriving next month is the fairy tale inspired The Grimm Forest from Druid City Games and Skybound Entertainment. Two to four players will take on the roles of family members of the Grimm brothers’ Three Little Pigs (makes you wonder what may have happened to that trio) as each aims to collect resources in order to build houses. Plenty of legendary characters are on had to to lend the porkers a hand, if needed. The game is for ages 8+, plays in about 45-60 minutes and will carry an MSRP of $49.99 when it hits stores on February 21st.

Welcome to The Grimm Forest, where family members of the legendary Three Little Pigs are having an epic house building competition. But this is no ordinary competition as all the most famous Fairy Tale characters will be looking on and occasionally lending a hand.

Who will benefit most from the cunning of Robin Hood, the beauty of Snow White, the bountiful gifts of the Golden Goose or the dark witchcraft of the Evil Queen?

Using only their wits, a handful of sharp steel tools, and a few stacks of resources gathered at great risk from fields, brickyards, and even the dark and deadly Grimm Forest itself, each player must compete to be the first to build 3 Houses and gain the title of Royal Builder. 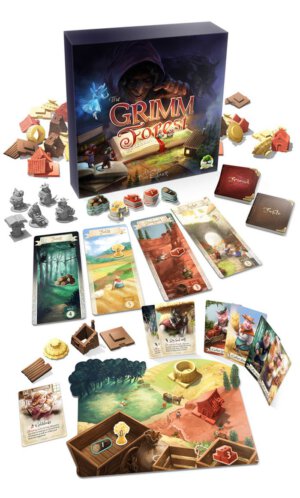 Players are encouraged to use any of the devious tricks they have read about in the many books of Fables found throughout the land. Some will have their plans wrecked by that villain of old, the Big Bad Wolf, while others will gain bricks, straw, and wood by the cart load.

Who will brave the dangers, avoid foul monsters, and bring home the victory? There is only one way to find out… get ready to venture into …The Grimm Forest!

Grimm Forest is a 2-4 player strategic game of Hidden Movement, Resource Gathering, and House Building. It is a medium weight game that plays in approximately 45-60 minutes.

During the game, players will play cards secretly to move to various Location boards where they attempt to gather resources. Using their deduction skills and a hand full of Fable cards, players attempt to guess each other’s plans and make the most of their actions while disrupting the other player’s plans.

After resources are collected during the Gather Phase, players will enter a Building Phase where they can use those resources to build Wood, Straw, or Brick Houses. Whenever a player builds a Wall Section on one of their houses, a helpful Friend from the nearby forest comes to lend a hand. Players may choose to accept the help of that Friend, but occasionally it makes more sense to send that Friend to a different player, sometimes discarding their current Friend in the process.

With 16 unique Fable cards and 12 powerful Friend cards, gathering resources in the Grimm Forest can be a difficult and challenging endeavor.

Work hard, deduce correctly, avoid the treachery of the other builders and the sharp teeth of the lurking monsters, and you just might have a chance!

Build Your Magical Metropolis in ‘Sorcerer City’ This August

Prepare to Answer the ‘Guardian’s Call’ This February