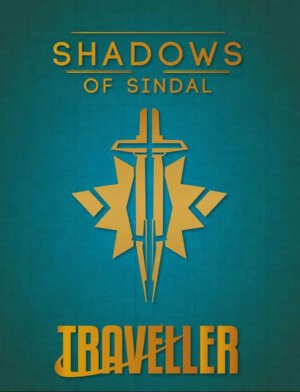 Mongoose Publishing is currently taking preorders for the print edition of the Traveller: Shadows of Sindal campaign book. The trio of adventures can easily be slotted into The Pirates of Drinax campaign or used as standalones. The 120 page book can be preordred for £35.00 or grab the PDF right now at DriveThruRPG for $26.99.

Shadows of Sindal is a three-part campaign set against the backdrop of the Pirates of Drinax. The discovery of a long-forgotten key prompts a mission to Paal, an easy task to find and open a vault containing treasures from the Empire of Sindal. King Oleb expects a quick return with a huge payoff, but nothing is ever that simple.

In Search of Sindal: The Travellers voyage to Paal and search for the vault. They discover that someone has used a horrific bioweapon against Aslan settlers in the world’s remote outback. Rather than killing them it has turned the warlike but noble Aslan into deranged murderers. The vault does indeed contain treasure, but not the sort King Oleb is expecting.

The Plague of Sindal: Reports that the bioweapon has been used on other bands of Aslan suggest someone is testing it before attacking a major world. Tensions are rising; it seems likely the Aslan Hierate will strike to pre-empt the threat, and the border worlds will suffer the consequences. The Travellers are set the task of finding out who is developing this weapon and shutting them down to prevent a war.

The Prince of Sindal: Prince Richter of Gerhai has proclaimed himself heir to the Sindalian Empire. His followers are forming militias on worlds all along the Dustbelt and there is open conflict on Acis. If Richter wins, King Oleb’s dreams of reclaiming the Sindalian Empire are dead. If the Aslan win, Drinax is doomed. The Travellers must find a way to derail Richter’s scheme without causing a war with the Aslan – or handing control of the Dustbelt to the Hierate.

Shadows of Sindal can be played as part of the Pirates of Drinax campaign or as a standalone adventure.