‘Pulp Cthulhu’ Finally on the Near Horizon for Chaosium

It’s been a long time coming but it looks as if fans of H.P. Lovecraft related RPGs will finally get a chance to add Pulp Cthulhu to their collections. Having spent nearly a decade and a half in some form of development at Chaosium, the full color 272 page rulebook is currently at the printers for proofing and review according to the company. While the folks at Chaosium have long produced the highly regarded Call of Cthulhu, they also know a segment of gamers – who enjoy the Lovecraft tales – are a bit turned off by the system’s high player character body count and normally grim resolutions to many adventures.

Pulp Cthulhu is aimed at gamers who want a heavy dose of Mythos horror alongside pulpy two-fisted action and adventure. Plus the new book includes modifications to latest CofC system including character generation, new sanity rules, the inclusion of psychic powers and weird science, and a whole lot more to “pulpify” Mythos adventures in the 1930s. Doc Savage or The Shadow versus the Great Old Ones anyone?

My best guess is Pulp Cthulhu won’t be a stand alone product in it’s own right but will require a copy of the Keeper’s rulebook. I have no confirmation but that would seem about right seeing it was a stretch goal for those who backed the Call of Cthulhu 7th edition Kickstarter on a level where they received the physical core book.

The PDF of Pulp Cthulhu has been released to backers which means we should see it available digitally very shortly. I’ll guess a physical edition of the book should be arriving in stores sometime this summer right around convention season. Obviously, we’ll keep you informed of new developments as they become available.

Jeff McAleer
Founder/Editor-in-chief of The Gaming Gang website and host of The Gaming Gang Dispatch and other TGG media, Jeff tackles any and all sorts of games but has a special fondness for strategy, conflict sims, and roleplaying games. Plus, he's certainly never at a loss for an opinion...
Latest posts by Jeff McAleer (see all)
Tags: Call of Cthulhu, Chaosium Publishing, Pulp Cthulhu, RPGs 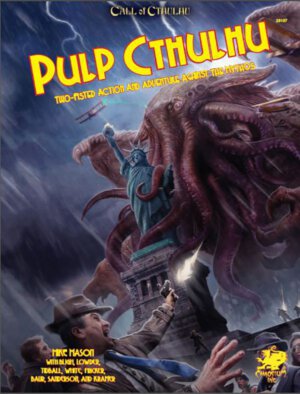 ‘Pulp Cthulhu’ Finally on the Near Horizon for Chaosium

It's been a long time coming but it looks as if fans of H.P. Lovecraft related RPGs will finally get a chance to add Pulp Cthulhu to their collections.
0
Awful