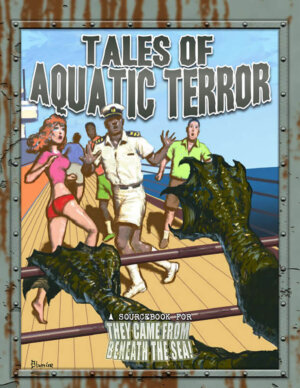 Onyx Path Publishing has release the first supplement for the 1950s SF inspired They Came from Beneath the Sea! Tales of Aquatic Terror! features four all new adventures filled with pulpy science fiction/horror goodness. The 69 page ook is available as a softcover, with PDF, at DriveThruRPG for $14.99 or grab the PDF alone for $6.99.

Terence and Judith hadn’t been away from shore longer than three days, but already the luxury cruise was alleviating their accumulated stresses. No working grind for a month, the kids safely ensconced in the best boarding school money could afford, and none of the neighbor’s irritatingly mundane tales of clogged garbage disposals and weeds in need of pulling. This was the life.

As the couple reclined on their deck chairs, the sun beating down on their toasting skin, Judith reached her right hand over to where she suspected Terence’s left should be. She wanted to give it a squeeze to say “Thank goodness we made this decision.” But instead of his hand, her fingers found something else to squeeze: slimy, long, and writhing.

Judith leapt from her lounger with a shriek, sunglasses falling from her face. The horrible sight that was her husband revealed himself before her! Something had replaced him, but not only him! Before her very eyes, the crew changed into cephalopods on legs!

Judith screamed for a long, long time, but nobody heard her cries, or those of the other passengers on the Swan. The liner drifted for another month before it was discovered, and by that time, not a living soul remained…

Tales of Aquatic Terror! is a book of playable stories for They Came from Beneath the Sea!, containing four adventures of varying length and complexity ready for play straight from the pages.

As with the stories in They Came from Beneath the Sea!, these tales of terror can be played in the mode of farce, horror, or anything in between. This book contains options for terror far at sea, frights at the beach, and deep conspiracies in 1950s American society, which isn’t as pure as it would have us believe. Each of these stories is fit to be played as one-shots or as parts of longer stories!

They Came from Beneath the Sea! uses the Storypath System.