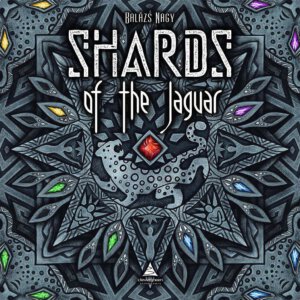 Following a very successful Kickstarter, Clevergreen Board Games will be bringing Shards of the Jaguar to the masses. In the game, players will not only explore a dungeon to retrieve revered artifacts but will also take on the role of the dungeon too, setting traps for their competitors. The game is for one to four players, ages 12+,plays in around 90 minutes, and will carry an MSRP of approximately 45 Euros when it arrives in late 2021.

Shards of the Jaguar is a tabletop game of strategy, deduction and traps!

There was Kahanur, the founder and first leader of your tribe, who was a mighty warrior. One of the reasons he was so powerful was his ability to change his shape and  take the form of a jaguar. As a jaguar, Kahanur was an unstoppable force and defended your tribe succesfully for many years. But on an unfortunate day, a mysterious enemy attacked and cursed him. And as a result, the jaguar was defeated and broken into crystal shards…

You and your fellow young tribe members have to go to the sacred temple – where the Jaguar’s remaining shards are still to be found -, and take part in an Initiation ceremony. 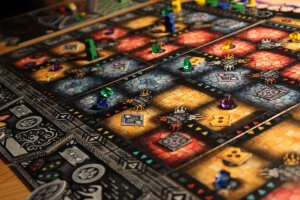 Your goal is to acquire the Jaguar’s best skills by collecting it’s shards, making rituals with them, and incorporating the Jaguar’s hunting instinct by setting traps against the others. If you are successful in your journey, you will come back as a powerful hunter, and the best of you will be the next chief of the tribe.

Shards of the Jaguar has eight rounds, and in each round, each player sets a trap secretly (Poisonous Gas/Darts/Guards/Earthquake), and then each player moves their character in the temple spending action points.You can move, take crystal shards, perform rituals and heal yourself in your turn for the action points. But move carefully! Each space on the game board could contain a secret trap – activated by another player – so you have to pay attention to each other’s movements to be able to find out which traps will be activated and so which spaces are safe for that round.

After each player spent their action points, you activate the traps and check who got hit by them (gathering different negative effects). If you were able to hit another player with your trap, you get glory points, as you are worthy of the Jaguar’s hunting instinct. At the end of the game you count the points you get for the crystal shards, the glory points for the successful traps, and the player with the most points wins the game.

Tags
Balazs Nagy Clevergreen Board Games Shards of the Jaguar