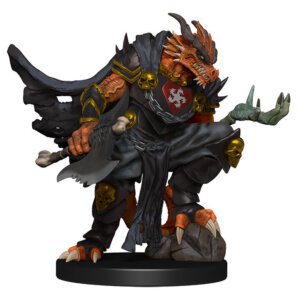 The Blood War rages on! Tiamat’s General, Arkhan the Cruel’s Descent into Avernus is triumphant ! Now, he is in possession of a dangerous artifact that could ultimately free the Dragon Queen and wreak havoc over the realms. Designed for use with the Dungeons & Dragons fantasy roleplaying game, this figure set will help you flesh out your campaign.

The set includes Arkhan the Cruel, his Minotaur bodyguard Torogar Steelfist, his Tortle Death Cleric Krull, one of his Berserkers, a summoned White Abishai, and his Manticore pet Chango’. Designed by Arkhan himself Joe Manganiello with WizKids, these figures give you the power to bring the epic story to life! Can you trust Arkhan the Cruel and The Dark Order or will there be war?