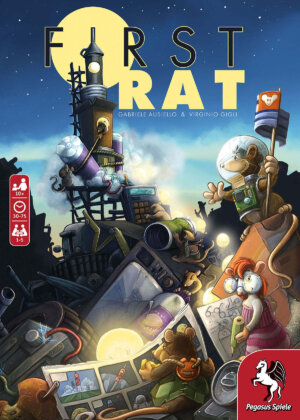 A new family game is on the horizon from Pegasus Spiele. Players will lead their team of rattronauts, with their eyes on the Cheese Moon prize, in First Rat. The game is for one to five players, ages 10+, plays in around 30 to 75 minutes, and will carry an MSRP of $39.99 when it arrives early next year.

A rocket building game for 1 to 5 rat friends.

For generations, the rats in the old junkyard have been telling each other the great legend about a moon made out of cheese and they want nothing more than to reach this inexhaustible treasure one day. One day, the little rat children discovered a comic in the junkyard that described the first landing on the moon. And thus the plan was born. Build a rocket and take over the Cheese Moon! Fortunately, the junkyard has everything the rats need to build their rocket and the other animals are willing to support this daring venture—at least if they’re well paid. Of course, all the rats work together to achieve this mighty goal. However, each rat family competes to build the most rocket parts and to train the most rattronauts so they can feast on as much of the lunar cheese as possible.

Each player starts with 2 rats and may raise 2 more. On a player’s turn, they can: Move rats towards the rocket, Collect resources, GO shopping, 4. Build rocket parts (optional) and Donate cheese. There are score tracks for the built parts and cheese provisions.

The game ends when…

There is a solo mode as well as variable game setups described in the rule book.