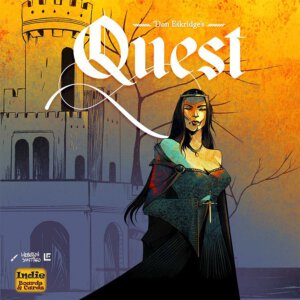 Indie Boards & Cards if nearing the end of their Kickstarter for the Quest: Avalon Big Box edition. The release will contain two games: the new Quest as well as a revamped deluxe Avalon. Both games are contained in the box, the project is over 800% funded, and you can reserve a copy for a $36.00 pledge through August 21st. Expected delivery is next January.

In Quest, all will show their true colors as Good and Evil struggle for the future of civilization. Hidden amongst King Arthur’s loyal servants are Mordred’s unscrupulous minions. These forces of Evil are few in number, but if they go unknown, they can sabotage Arthur’s great quests.

Players are secretly dealt roles that determine if their allegiance is to Good or to Evil. Then, players debate, reason, and lie as they decide who to send on Quests—knowing that if just one minion of Mordred joins, the Quest could fail. Quest includes 25 different characters and many different ways to play the base game.

Avalon pits the forces of Good and Evil in a battle to control the future of civilization. Arthur represents the future of Britain, a promise of prosperity and honor, yet hidden among his brave warriors are Mordred’s unscrupulous minions. These forces of evil are few in number but have knowledge of each other and remain hidden from all but one of Arthur’s servants. Merlin alone knows the agents of evil, but he must speak of this only in riddles. If his true identity is discovered, all will be lost.

Avalon is for five to ten players, ages 13+, and plays in around 30 minutes.