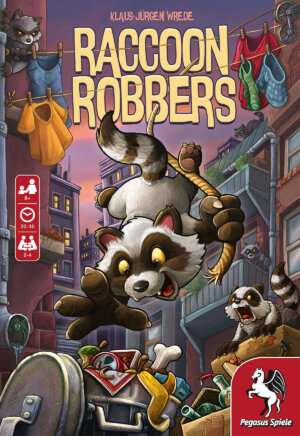 Next month will see the release of the family friendly game Raccoon Robbers from Pegasus Spiele. In the game, players control their own raccoon boss as they look to score the golden rubbish bin of endless food trash. Raccoon Robbers is for two to four players, ages 8+, plays in around 20 to 30 minutes, and will carry an MSRP of $34.99 when it hits stores in June.

The raccoons are on the hunt for the best leftover food. Push your “Don Raccoon” forward and get the golden trash can! Only one raccoon can reach the golden trash can. Strategically use cards to climb up houses and vault into the backyard. But be careful, as there’s only so much room, and opposing raccoons can push you out of the way and tumbling down!

The raccoons have organized into gangs, and each raccoon gang boss in Raccoon Robbers wants to be the first to reach the famous golden rubbish bin that’s filled with endless amounts of thrown-away food.

The playing area is set up by individual pieces that represent the fields to which the raccoons can move — but only one raccoon can stay on a field, and it will throw other player’s figures down to lower places. With hand cards that allow their own raccoons to climb up or down, each player can try to throw down other raccoons, move their own up, or climb down by free will before they get thrown by others.

Thanks to the flexible set-up, each game can played differently with various difficulty. 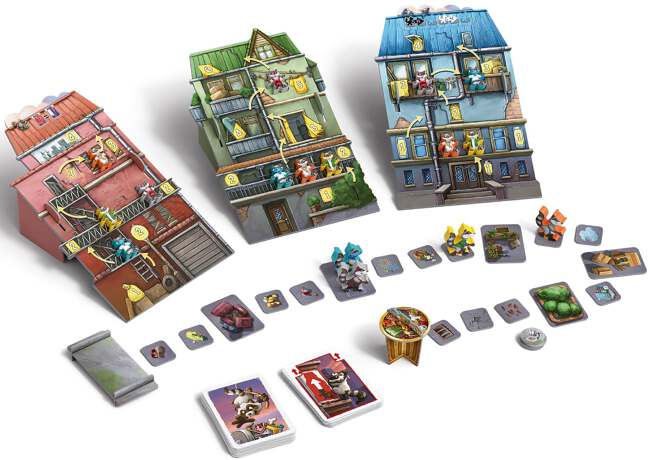