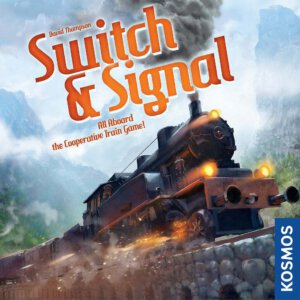 KOSMOS will be releasing the cooperative railway game Switch & Signal next month. The game tasks players with working together to route an expanding number of trains across either Europe or the U.S. The game is for two to four players, ages 10+, plays in around 45 minutes, and will carry an MSRP of $49.95 when it arrives February 4th.

Who is best to keep track of things? There is an incredible amount of traffic on the rails! It’s pretty relaxed at first, but the more trains that are put on the game board, the tighter it gets. Has the course been set correctly? Is the train really on the right route? Is the signal green?

All aboard the cooperative train game! You begin this cooperative, family-friendly train game controlling just a few trains on the tracks. At first, it’s easy to make them travel where you like. As more trains arrive, you have to plan and coordinate your train schedules. Is the signal green? Where is this train going? Oh no, the switch wasn’t set! If your train heads off in the wrong direction, your goods won’t arrive on time! Only by working together to schedule and move your trains efficiently will you and your team of conductors be able to win the game. The two different gameboards, Central Europe and North America, each bring fun challenges to overcome.

EXIT The Game: The Return to the Abandoned Cabin Arrives in June

Exit: The Game – The Lord of the Rings: Shadows over Middle-earth Arrives in June