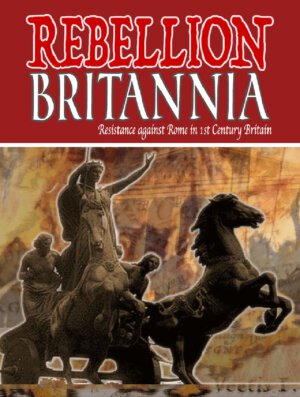 Currently up for preorder from GMT Games is the card driven wargame Rebellion: Britannia. In the game, players take the role of the First Century Roman forces in in Britain or the rival British tribes. Rebellion: Britannia is for one to four players, ages 12+, and plays in around 60 to 90 minutes. You can preorder the game right now at the P500 price of $52.00 with an eventual MSRP of $75.00.

Rebellion: Britannia is a game about the Roman military campaigns to suppress the Silures, Brigantes, and Boudica Rebellions (47-61 CE) and the relationships between the key British tribes.

Claudius’s invasion of Britain in 43 CE was a military success. However, as a series of rebellions demonstrates, this military success was not so much the end of the story but rather the beginning. The British tribes were unruly, and even when defeated in large pitched battles, they did not cease antagonizing Rome nor, indeed, each other. For the British tribes, expansion seems not to have been an overriding concern, but they nevertheless were engaged in a struggle to survive in an environment dominated by Rome. Survival might mean battle, but it might also mean finding other ways to protect or encourage trade, agriculture, crafts, or sites of ceremonial importance. In the midst of this strife, the island of Britannia provides the perfect arena for players to champion one of four factions as they compete to establish or reclaim their foothold on the land.

Rebellion: Britannia is a game about the Roman military campaigns to suppress the Silures, Brigantes, and Boudica Rebellions (47-61 CE) and the relationships between the key British tribes.

In this game, 1-4 players take control of one of the powerful factions of the time: either Rome or one of the key British tribes—the Iceni, Silures, or Brigantes. Over the course of 12 game rounds (lasting 60-90 minutes), players attempt to gain the most victory points by controlling land, burning Roman infrastructure, and reducing enemy forces.

Rebellion: Britannia is a card-driven wargame. Each player’s available actions are largely dictated by the cards they currently have available to them, and, following a simple Sequence of Play, players use these cards to recruit and move pieces on the board, secure control of regions, engage in diplomacy, form alliances, and battle against their rivals.

Rebellion: Britannia is fast to learn—it’s a low complexity asymmetric game with few rules, a simple sequence of play, and a high quotient of strategic choices. The game depicts a dynamic military and political situation in first-century. Britain, distilled into 60-90 minutes of play time.

Almoravid: Reconquista and Riposte in Spain 1085-1086 | Unboxing and First Look