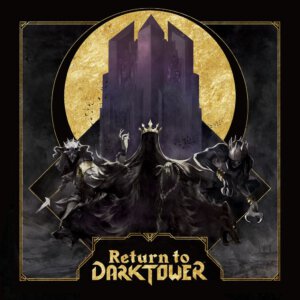 Restoration Games is riding a hot streak as the crowdfunding project to release a revamped “sequel” of the early 1980’s Dark Tower electronic board game is rocking Kickstarter. Return to Dark Tower promises many of the unique aspects of the original game, where the rudimentary computer of the tower handled all the random generations and resolutions, while also introducing mechanisms and polish found in 21st century board games. The game is for one to four players, ages 10+, and plays in one to two hours. The project is nearing the $2 million funding mark and you can reserve a copy of the game, and unlocked stretch goals, for a $125.00 pledge through February 4th. Expected delivery is February of 2021.

The coolest game to ever hit the planet first appeared some 38 years ago, featuring an electronic tower that lit up, played music, and somehow ran an epic fantasy adventure game with its state-of-the-art technological wizardry. That game was Dark Tower. We want to bring you that same sense of awe and wonder, pushing the boundaries of what a board game can actually do. After 3 years of painstaking work by a team of two dozen designers, engineers, and artists, we are thrilled to present to you a game with echoes of that long-gone wonder but ultimately unlike any game you’ve ever experienced.

For an age, the tower lay in ruins. Unbeknownst to the people of the realm, a great evil stirred in its bowels. It started with strange sightings: a flock of crows flying in circles until they dropped from the sky, the lake frozen solid in the height of summer. In time, they could not deny that which they most feared.

The evil had not been vanquished. The darkness would soon fall again. The tower will rise.

A “sequel” to the 1981 grail game, Return to Dark Tower is a cooperative game for 1-4 players who take the role of heroes. Together, they gather resources, raise buildings, defeat monsters, and undertake quests to build up their strength and discern what foe ultimately awaits them. When the heroes face the tower, the game shifts into its dramatic second act, where the players have one chance to defeat the enemy once and for all.

The game features traditional game mechanisms, such as engine building and resource management, paired with a technological interface unlike any seen before in games, including the titular tower, which holds more than a few secrets.