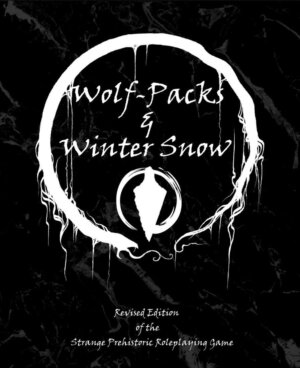 The well received roleplaying game of strange prehistoric adventure, Wolf-Packs & Winter Snow, has received a new revised edition hardcover from Dying Stylishly Games. The system aims to bring the streamlined gameplay of the OSR scene to a setting where man lives alongside the Neanderthal. The premium full color, 292 page hardcover is available exclusively from DriveThruRPG for $55.00.

This is a time before writing, money, walled settlements and the many other comforts of civilization. The ice-age wilderness is harsh, and filled with dangerous beasts. In dark forests and the depths of caves, there exist other, stranger creatures; mad beasts that are the products of magic.

The ice age is coming to an end. Retreating ice-sheets reveal tracts of land unseen for millennia with each spring, and in their wake leave the environment in turmoil. As the snow withdraws, modern humans follow, and every year new tribes of humans enter the Neanderthal‘s ancestral lands.

Against this backdrop, magic begins to emerge as a force in the world. Driving the rise in art – jewellery, cave paintings and figurines – that will fascinate later historians, some humans begin experimenting with the supernatural, learning to shape the wild forces of the world into controllable spells and items of power.

A revised and expanded version of Wolf-Packs & Winter Snow. Now with double the page count, glorious full-page illustrations, and huge piles more content to allow you to run the game straight out of the book with no preparation time.
Included in this book is everything you’ll need to run or play in games set in the fantasy ice age.  Inside, you’ll find-

All in a rules system that will be familiar to any fan of the OSR. Stripped down, streamlined, and customized to match the stone-age setting.