Capstone Games has announced a new release slated for this Fall. In Rise, players will aim to gain influence by developing a growing city. The game is for two to four players, ages 10+, plays in 60 minutes, and will carry an MSRP of $54.95 when it hits stores in November. Preorders are available now.

In RISE, you are responsible for the economic and social development of a city. In addition, you must also nurture the well-being of the citizens. Can you balance industrial progress and environmental pollution to keep your citizens happy and content? You will need money to further develop the city…but how much will you raise taxes and rent to do so?

A multitude of different options await you in RISE to make these life-changing choices. Experience the great challenges with over 1,000 unique combinations that the variable game setup can provide! Navigate your way through new actions and events each game to make RISE the city of everyone’s dreams.

In Rise, you assume responsibility for the economic and social development of a city. There are not many limits to your possibilities: On various tracks, you can influence how best to provide for your citizens’ well-being, whether through culture, science, or political relations — but all of this can be achieved only in accordance with respect for conservation of the environment and the satisfaction of the population.

The game revolves around ten tracks on which you move your markers to gain further effects and gather influence. The unique and innovative card mechanism, which includes events and tough decisions, will change your decision making from round to round.

Once twelve rounds have been played, players count their points to see who was able to accumulate the most influence in the city.

Jeff McAleer
Founder/Editor-in-chief of The Gaming Gang website and host of The Gaming Gang Dispatch and other TGG media, Jeff tackles any and all sorts of games but has a special fondness for strategy, conflict sims, and roleplaying games. Plus, he's certainly never at a loss for an opinion...
Latest posts by Jeff McAleer (see all)
Tags: Capstone Games, Rise! 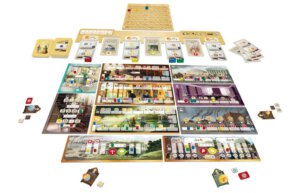 In Rise, players will aim to gain influence by developing a growing city.
0
Awful