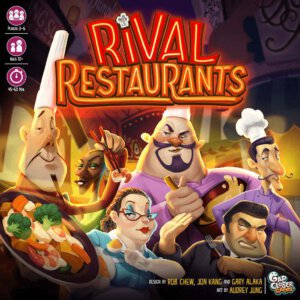 Following a successful Kickstarter, a chaotic game of restaurant management is hitting stores from Gap Closer Games. In Rival Restaurants, players will compete to cook various dishes to increase their popularity while also tossing wrenches into the plans of their opponents. The game is for two to six players, ages 10+, plays in 30 to 45 minutes, and will carry an MSRP of $49.00 when it hits stores shortly.

Your goal in Rival Restaurants is to be the first restaurant to get 20 popularity points and be crowned “The Wiener!” Players earn popularity points by buying and trading for ingredients and using them to “cook” (complete) recipes. The more advanced the recipe, the more points it’s worth.

1. MONEY and MOVE: Players collect their income for the day and decide where they want to move. Turn economy is crucial as players are not permitted to move for the rest of the day once their location has been chosen.
2) BUY and BARTER: Players have one minute to buy as much as they want but only from the location they’re in. Players can also barter/trade with anyone in the game, not just the people in their location.
3) COOK and COUNTER. Any player who has all the ingredients required for their recipe can cook it and collect popularity points.

In addition, each player controls a chef equipped with their own “chef power”. Chef powers are asymmetrical and allow players to bend the rules in their favor. The base game of Rival Restaurants has twelve chefs, and additionally, at the beginning of the game, each player must choose a restaurant to play, with each restaurant having a unique level-up structure with rewards for reaching 3, 7, and 12 popularity points. Lastly, players can also choose to buy “action cards”, that is, development cards that are typically for one-time use. 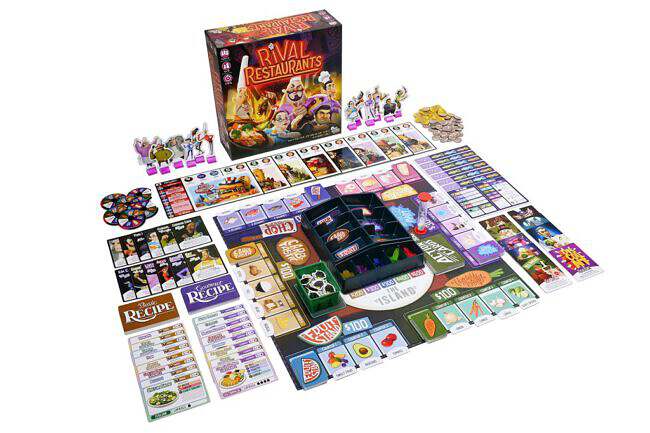