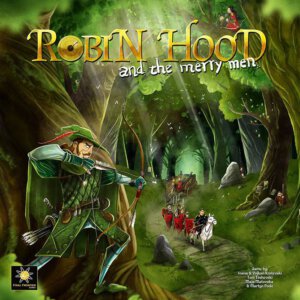 Yesterday Final Frontier Games launched their Kickstarter for the Euro-style game Robin Hood and the Merry Men and the project quickly blew past its funding goal by 700%. In the game, two to four players will compete as well as cooperate as they look to protect Nottingham while outwitting Prince John and the evil Sheriff. I definitely like the art style and this looks to be a pretty interesting release.

Robin Hood and the Merry Men is a thematic euro style game that perfectly blends worker placement, hand management, set collection and dice rolling into a one big exciting crossover.

It’s a fun game with multiple paths to victory, where you will live and breathe a true Robin Hood style adventure. The players take on the role of a famous outlaw such as Robin Hood, Little John, Will Scarlet and Jane Fortune, and their mission is to protect the town of Nottingham from the tyranny of infamous ruler Prince John and the notorious Sheriff of Nottingham throughout 5 rounds of onslaught. If they succeed, a winner is declared – the player with the most victory points becomes Nottingham’s greatest champion.

The art for the game is done by The Mico, the same artist behind the beautiful art in Final Frontier Games previous projects Rise to Nobility and Cavern Tavern, so Robin Hood and the Merry Men is expected to be a direct hit.