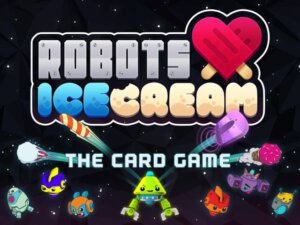 The popular Robots Love Ice Cream is about to make the jump from mobile devices to the table top. 25th Century Games has launched a Kickstarter to create a set collecting card game for one to four players, ages eight and up. Can you stop the evil Boris Boddington III and his legion of robots from stealing the galaxy’s ice cream supply? You’ll have to play to find out.

Crowd funding for Robots Love Ice Cream runs through December 14th and you can reserve a copy (and all stretch goals) at the $18 pledge level.

The card game is based on the hit video game Robots Love Ice Cream by mobile experience studio Dragon Army, also located in Atlanta, GA. The video game was released in 2014 and named one of the best games of the year on both iOS and Android. This tabletop version features all of the same characters and art style found in the video game plus new illustrations only available in the card game version.

“In the card game version, we capture all of the fun, fast-paced dynamics from the much beloved mobile game. The vibrant art, quirky characters, and semi-cooperative gameplay make it a must have addition to your family’s game collection,” said Chad Elkins, creator of Robots Love Ice Cream the Card Game. “It’s hard not to like both robots and ice cream, so layering that theme on an easy to learn set collection card game proved to be a big hit in play testing.”

One to four players travel in their ice cream trucks to five different planets across the galaxy. They must work together to collect matching sets of weaponized ice cream cards and use them to destroy waves of attacking robots. If all of the robots are defeated, Spinston’s plans are foiled, collectively saving that planet’s supply of ice cream treats.

The crowd-sourced Kickstarter campaign for Robots Love Ice Cream the Card Game will help raise funds for the manufacturing costs to produce the game. The campaign will begin on November 13th and conclude on December 14th.