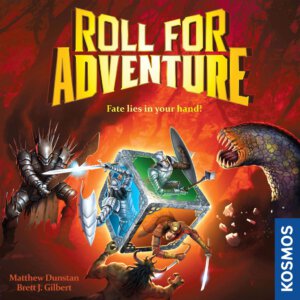 KOSMOS Games is readying the release of their cooperative fantasy board game Roll for Adventure at Gen Con. The players will join together to track down pieces of a magical amulet in order to stop the evil Dark Lord. Roll for Adventure is for two to four players, ages 10+, plays in around 30 minutes, and will carry an MSRP of $34.95 when it arrives on August 1st at both Gen Con and at your FLGS.

The old kingdom is in danger. Enemy armies are attacking from all directions thanks to the Dark Lord, who seeks to bring eternal darkness across the land.

The only chance the players have in Roll for Adventure is to band forces to collect the fabled power stones to complete the magical amulet. If they succeed, they’ll save the empire and win the game. However, should even one area fall under the control of the Dark Lord, the players lose the game immediately.

Each player receives a set of dice and a hero character with special abilities. Then, players work together to protect the four realms from the Master of Shadows and his minions. Use the results of your dice roll and your hero ability to complete challenges in the four realms. Once all the challenges in a specific realm are complete, you gain a power stone; collect enough power stones and declare victory over the Master of Shadows!