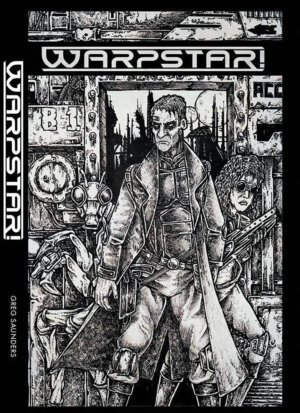 Fire Ruby Design has a new rules light science fiction roleplaying game available in print and PDF. Warpstar!, written by Greg Saunders, uses the same system as the well received Warlock! as the action moves beyond the stars. The 242 page hardcover is available at DriveThruRPG for $38.86 (including the PDF) or in PDF alone for $12.96.

Warpstar is a rules-light science fiction roleplaying game that aims to emulate the feeling of old-school British tabletop games of wondrous and fantastical adventure in the depths of space. Warpstar looks to reproduce the play style of its illustrious predecessors but in a light, quick and simple manner, with a consistent set of rules that are easily ‘hackable’ and adaptable as desired.

Warpstar is a tabletop roleplaying game, played with pencils, paper and dice. The implied setting is the Chorus of a million worlds, a sprawling stellar empire that spreads across the galaxy. The players control characters struggling to survive in a wondrous melting pot of aliens, robots, worlds and factions. Thematically, Warpstar is a science fiction game of perilous adventure. However, Warpstar does not contain lots of explicit setting information, so you can use it with your favourite published or home-made adentures and settings. Instead, Warpstar aims to give you a simple and concise set of rules that you can shape as you need.

Note: The book is black and white with a small amount of colour, however the premium colour option has been chosen for the print version as it represents a much better quality of paper with an improved look and feel.