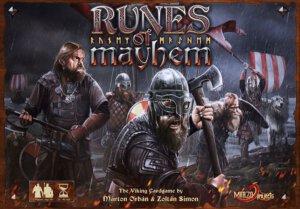 Marzo Projects is very near to hitting their funding goal for the Vikings card game Runes of Mayhem. In the game, two players go head to head as the Viking invaders and Anglo Saxon defenders as each looks to destroy the other’s fortress. The game is for two players, ages 16+, and plays in 20 to 40 minutes. The project is 94% funded as of this writing and you can reserve a copy of the game for a $20.00 pledge through November 28th. Expected delivery is April 2020.

Runes of Mayhem is a fast, competitive, historical tactical card game for two, with a complete set of artistically designed, colorful cards and game elements that turn players into Viking raiders and Anglo-Saxon defenders. Rule the battlefield with powerful formations and lead your forces with mighty heroes. Overcome your opponent, destroy the enemy fortress and reap the spoils of war! How will you earn victory?

Runes of Mayhem is highly enjoyable from the very first play, with a level of tactical depth that makes it feel like a Wargame. Intense, yet lightweight, the game can be played with offensive or defensive strategies, and allows building momentum and speed as well as pausing for a while and trading. Many paths lead to victory, but only if you pay close attention and grasp the pace of the game. In Runes of Mayhem, you decide what road to take!