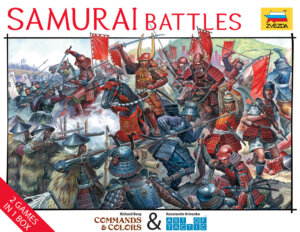 In what looks to be an interesting wargame release, Zvezda has announced Samurai Battles would arrive at warehouses in the U.S. yesterday so that should mean we’ll be seeing the title on store shelves soon. Samurai Battles incorporates Zvenda’s new 1/72 scale figures with two sets of rules. So the reality is you’ll receive two completely different games – using the same map and terrain tiles – but one being a Commands & Colors card driven design by Richard Borg and the other an Art of Tactic design by Konstantin Krivlenko using his Origin’s Award nominated system of secret planning and simultaneous movement. Seeing I’m a big fan of the C&C releases from GMT and I’ve heard really good things about Operation Barbarossa ’41, which uses the Art of Tactic system, this really looks like a game to watch. The MSRP for Samurai Battles is $79.95.

Zvezda is pleased to announce the upcoming release of a new historical board game featuring the intense battles of feudal Japan! Samurai Battles puts players in control of their own army of Japanese warriors, facing the same challenges as real battlefield commanders!

Samurai Battles includes everything you need to create exciting battles:

• Commands & Colors: Designed by the award-winning Richard Borg, this popular system goes to Japan for the first time! This unique card-driven game system already has a legion of fans who will be eager to experience the new opportunities and challenges of feudal Japan.

• Art of Tactic: Konstantin Krivenko’s hidden planning and simultaneous movement system was recently nominated for an Origins Award with the earlier Barbarossa 1941 game. This robust system has been modified to reflect the challenges of feudal Japanese warfare.

Both systems include a complete rulebook, along with a number of historically-based scenarios for hours of excitement, and all of the components needed to play. Try both games for completely different game play experiences!

Samurai Battles offers the player enormous expansion potential. Players can add any of the models in Zvezda’s constantly growing line of feudal Japanese model kits. Each model comes complete with everything you need to add it to either game system right away. 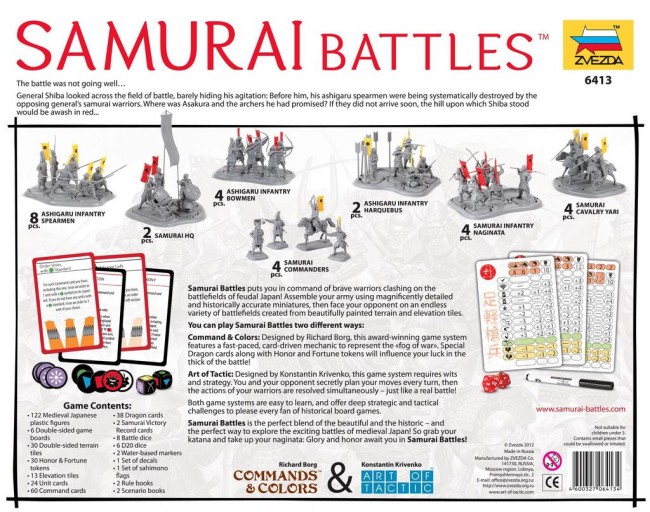 Ninja Attack to Expand Samurai Battles in May

Is Abaddon a Good ‘Un? A Review of Toy Vault’s Abaddon