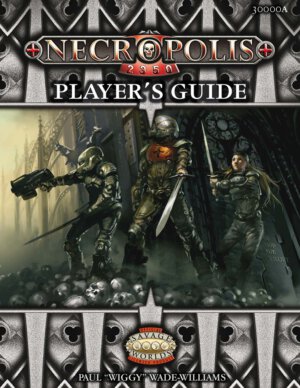 The newest Bundle of Holding has arrived and the grimdark science fiction RPG Necropolis 2350, from Triple Ace Games, is available for a song. It’s important to note that this bundle is set to benefit TAG’s “Wiggy” Wade-Williams, who recently suffered a debilitating stroke. Why not help a designer in need and score a cool Savage Worlds setting at the same time?

Adventurer! This Necropolis 2350 Bundle presents the campaign setting of grimdark 24th-Century horror from Triple Ace Games for Pinnacle Entertainment’s fast-furious-fun tabletop roleplaying game Savage Worlds. On Salus, humanity’s last habitable world, knights of the Third Reformation Church and soldiers of the Union of Corporations battle an onslaught by the undead Rephaim. Take the roles of Impalers, Incinerators, Preachers, and Templars in a desperate struggle against extinction. 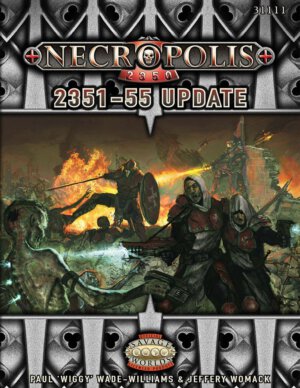 And if you pay more than the threshold price of $20.63, you’ll level up and also get our entire Bonus Collection with six more supplements worth an additional $64, including four character guides, the 200-page Necropolis Adventure Compendium, and the Necropolis 2351-55 Update, a major expansion that pushes the timeline to still more hellish depths.

Last month Triple Ace Games Creative Director and prolific roleplaying designer Paul “Wiggy” Wade-Williams suffered a stroke. TAG director Robin Elliott says, “Wiggy had two smaller strokes in the summer and has not been well for several months. He suffered a stroke three weeks ago that has affected his ability to communicate. His current condition is stable, but his language center was hit, and he struggles to complete sentences. He is unable to type, and using a computer is difficult. But we hope with some months of recovery and speech therapy he will be able to get back his typing and writing skills, which are crucial to his work.” Ordinarily ten percent of each Bundle of Holding purchase goes to a charity. This benefit offer assigns that charity portion to Triple Ace Games, to help TAG and Wiggy in a tough time.