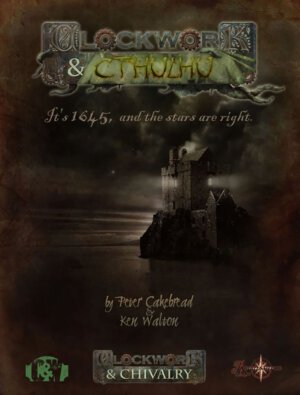 Bundle of Holding has a new RPG PDF offering perfect for Halloween; Clockwork & Cthulhu from Cakebread and Walton. Okay, the bundle includes more than simply 17th century Mythos madness with plenty of Renaissance steampunk and dark horror as well. You can jump on board starting at $14.95 and ten percent of your purchase (after payment gateway fees) will be donated to this offer’s designated charity, Rainforest Trust.

Adventurer! This new Clockwork & Cthulhu Bundle presents alternate-historical Mythos and flintlock-fantasy tabletop roleplaying games from Cakebread & Walton. Clockwork & Chivalry takes you to the English Civil War of 1645, but fought with witchcraft and basilisks, with Francis Bacon’s alchemy and Oliver Cromwell’s war machines. And in the horror campaign supplement Clockwork & Cthulhu and the standalone companion game Dark Streets, the stars align for the return of the Old Gods — the creatures of HP Lovecraft’s Cthulhu Mythos. Using the percentile-based Renaissance System adapted from OpenQuest (itself derived from Mongoose Publishing’s RuneQuest), these RPG ebooks transport Investigators and historical game fans to a wild and Sanity-draining past-that-never-was.

For just US$14.95 you get all three complete, current rulebooks in our Starter Collection (retail value $63) as DRM-free .PDF ebooks, including Clockwork & Cthulhu, Dark Streets Second Edition, and Clockwork & Chivalry Second Edition (previously presented in our August 2013 Bundle of the Ages).

And if you pay more than the threshold price of $29.80, you’ll level up and also get our entire Bonus Collection with nine more titles worth an additional $82.50: