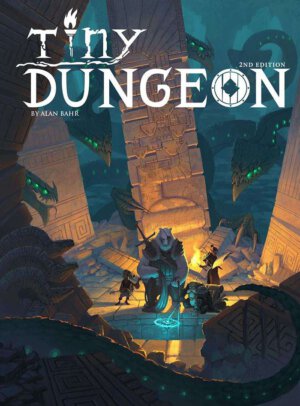 Gallant Knight Games and Bundle of Holding are teaming to bring you big savings on not only core Tiny Dungeon PDFs but also other Tiny D6 titles such as Beach Patrol, Tiny Frontiers, and Tiny Wastelands. You can get started for as low as $9.95 and ten percent of your purchase (after payment gateway fees) will benefit Doctors Without Borders. This special bundle is available for the next two weeks.

For just US$9.95 you get all five titles in our Dungeon Collection (retail value $37) as DRM-free .PDF ebooks, including the complete Tiny Dungeon 2E core rulebook (previously presented in last year’s Indie Cornucopia 6), plus its free quickstart set Mad Magicks of the Turned God and Quickstart Characters; the Tiny Dungeon Player’s Guide; the print-and-cut Bestiary Deck and Treasure Deck; and the GM Screen.

And if you pay more than the threshold price of $20.71, you’ll level up and also get our entire Universe Collection with seven more minimalist TinyD6 titles worth an additional $61, including the standalone RPG of streamlined post-apocalypse action Tiny Wastelands Revised Edition (plus its Enclave Deck and GM Screen); the space opera SFRPG Tiny Frontiers Revised Edition (plus its Rules Expansion); the Tiny Frontiers sourcebook Mecha and Monsters (plus its Mecha and Monsters Pregen Cards); and, for summer-season lifeguarding action and bay-watching glamour, Beach Patrol (plus its free set of Quickstart Characters).