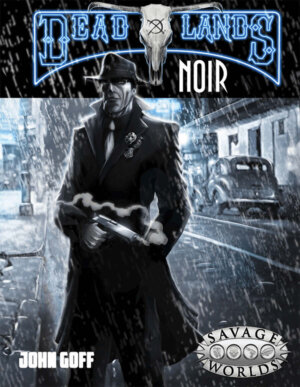 Just in time for Halloween comes a new Bundle of Holding featuring the Deadlands Noir horror RPG from Pinnacle Entertainment Group. Jump into the roleplaying world of mystery and the supernatural starting at $14.95 or go all in for $26.10. These savings run through November 8th and ten percent of your payment (after gateway fees) goes to the National Center for Missing and Exploited Children.

Listen, flatfoot: We’ve resurrected our August 2016 Deadlands Noir Bundle featuring Deadlands Noir, the hardboiled fantasy setting for the Savage Worlds Explorer Edition tabletop roleplaying game from Pinnacle Entertainment. Noir makes you a detective, criminal, houngan, or Patent Scientist on the grim streets of 1930s New Orleans in the universe of Deadlands, Pinnacle’s weird-horror-Western RPG where the USA has broken up and strange things haunt the shadows. This bargain-priced collection brings you all the sourcebooks, adventures, music, and maps from the successful May 2012 Deadlands Noir Kickstarter campaign. It’s everything you need for darkly fantastic investigation in the shadowy Big Easy.

And if you pay more than the threshold price of $26.10, you’ll level up and also get this revival’s entire Bonus Collection with nine more titles worth an additional $61, including the massive 209-page Deadlands Noir Companion, two full-length adventures, four more Combat Maps (Bayou, Bayou Cabin, Cemetery, and Crypts), and Music to Die For: nine audio tracks especially composed to enhance your Deadlands Noir sessions.