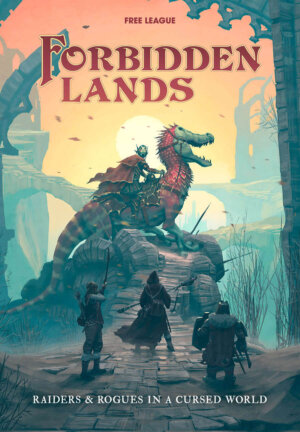 A new Bundle of Holding has arrived and it features the old school style roleplaying game Forbidden Lands, from Free League Publishing. You can get started with the core book and four adventures for $7.95. The savings run through February 8th and ten percent of your payment (after gateway fees) will be donated to this Forbidden Lands offer’s pandemic-related charity, Direct Relief.

Adventurer! This all-new Forbidden Lands Bundle features the Forbidden Lands tabletop fantasy roleplaying game from Free League Publishing (Alien, Vaesen, Tales From the Loop, Coriolis). In this open-world survival FRPG, you’re not heroes sent on missions dictated by others — instead, you are raiders and rogues bent on making your own mark on a cursed world. Travel the land in any directions you want, exploring as you wish. You’ll discover lost tombs, fight terrible monsters, wander the wild lands and — if you live long enough — build your own stronghold. Two Forbidden Lands Kickstarter campaigns in September 2017 and September 2019 together raised half a million dollars. Now get almost all the digital rewards from both campaigns — rulebooks, cards, maps, and tokens — for an unbeatable bargain price.

For just US$7.95 you get all three titles in our Starter Collection (retail value $40) as DRM-free .PDF ebooks, including the complete Forbidden Lands Core Game (both the Player’s Handbook and the Gamemaster’s Guide), the print-and-play Forbidden Lands Card Deck .PDF, and a book of four unique adventure sites, The Spire of Quetzel.

And if you pay more than the threshold price of $19.73, you’ll level up and also get our entire Bonus Collection with four more titles worth an additional $53, including the campaign expansion The Bitter Reach (plus its Map & Cards Pack) plus the full-length campaign Raven’s Purge and more honey-drenched adventure sites in Crypt of the Mellified Mage.