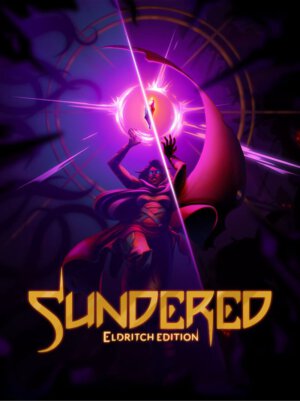 This week’s free PC title from the Epic Games Store is Sundered: Eldritch Edition from Thunder Lotus Games. The metroidvania style platformer holds plenty of H.P. Lovecraft inspired terrors. The game is available through January 16th at 10am.

Sundered is a chaotic hand­-drawn metroidvania where you resist or embrace ancient eldritch powers. Confront hordes of terrifying enemies in an ever-changing world inspired by the works of H.P. Lovecraft.

You play Eshe, a wanderer in a ruined world, trapped in ever-­changing caverns filled with hordes of terrifying enemies. Harness the power of corrupted relics to defeat gigantic bosses, at the cost of your humanity.

Delve into a procedurally generated dungeon at the heart of a beautiful hand-drawn world. Confront hordes of dynamically spawned eldritch monsters. Put your skills and reflexes to the test through furious melee combat and epic boss fights.

Designed as a challenging adventure for seasoned gamers, death in Sundered is only the beginning. When you die, you respawn in the Hub, where you level up and customize your character. Equip and upgrade a host of unique Perks, stats and special Abilities.