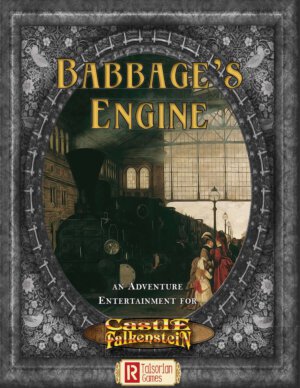 A new roleplaying adventure for the fantasy/steampunk game Castle Falkenstein is available from R. Talsorian Games. In Babbage’s Engine, the player characters will embark on the maiden rail trip of the Paris-München-Vienna Express Line. The game’s afoot though as an evil mastermind plots to get his hands on the train’s advanced technology. The 25 page adventure is available absolutely free at DriveThruRPG.

A brass band plays as hundreds of onlookers crowd the railway platform, eager to catch a glimpse of the Duchess Elisabeth as she departs on her maiden journey along the new Paris-München-Vienna Express Line. This train, the most advanced in the world, will allow travel from one end to the other in a mere two days instead of the normal three! Operated by an advanced Babbage Engine and appointed with the finest of luxuries, this train represents the firm alliance of France, Bayern, and the Austrian- Hungarian Empire and serves as a showpiece of their technological prowess.

A prowess one particular mastermind covets with all his black heart…

Babbage’s Engine is an Adventure Entertainment for the award-winning roleplaying game of High Adventure in the Age of Steam, Castle Falkenstein!