Following last weekend’s Dungeon Crawl Classics Day, two new releases are available in PDF from Goodman Games. Both the DCC Day 2021 Adventure Pack and DCC Day #2: Beneath the Well of Brass are chockfull of roleplaying goodness as the former contains three adventures and the later is a new 0 level tale from Harley Stroh. Sorry to say the physical copies of these releases are already sold out but you can still grab them each in PDF at DriveThruRPG for $6.00 each. 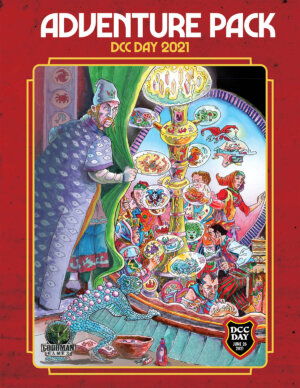 For DCC RPG, Temple Siege is a level 1 adventure where all the action takes place in a single room. It’s an atypical adventure full of surprises that will keep your players guessing.

For DCC Dying Earth, Fathoms Below Witch Isle is the first published adventure set in the world of Jack Vance’s Dying Earth. This level 1 ad- venture starts with the party traveling as passengers aboard an unusual ship driven by huge sailing worms. They must survive sea demons, a shipwreck, and capture at the hands of the strange inhabitants of an underwater isle who seek to use them as sacrifices to a bizarre fiend who plagues their home.

For Mutant Crawl Classics, The Neverwhen Rock is a new level 0 funnel adventure. It is time for the primitive party members to undergo their “rite of passage,” which involves exploring unknown parts of their world and returning stronger and wiser (or with artifacts in hand). This adventure can also connect back to the MCC adventure in last year’s DCC Day Adventure Starter. 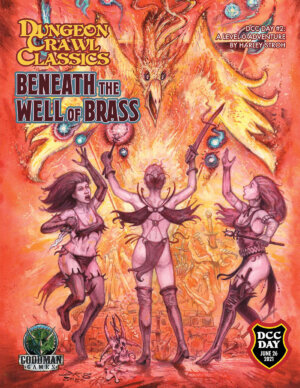 DCC Day #2: Beneath the Well of Brass

As long as you’ve known of the flame-licked caves and suffocating caverns, they have been forbidden to your people. But three days ago the Black King and his brigands overran your small hamlet, taking friends and family hostage. His demands are as simple as they are impossible: Venture into the burning caverns and return with the secret of eternal life.

Now, standing before the seething fissure, armed with only your simple tools and desperate courage, you must accomplish what an army of blackguards cannot. The Well of Brass awaits.

Designed to be run in a single session, this introductory 0-level module wrenches your PCs free from their humble lives and casts them into a world of high adventure. Many will perish amidst the strange mysteries, weird foes, and forgotten magics, for only the most courageous and cunning of reavers can emerge from Beneath the Well of Brass.