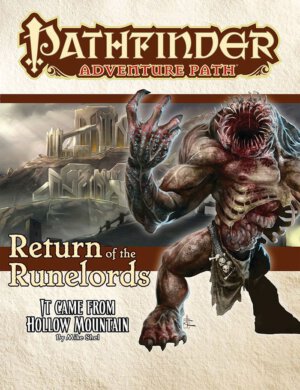 Pathfinder Adventure Path #134: It Came from Hollow Mountain (Return of the Runelords 2 of 6)

The Return of the Runelords Adventure Path continues as the heroes travel south to the city of Magnimar with disturbing news—the ancient runelords of Thassilon are awakening! With Varisia’s greatest heroes on a secret mission, the task of following up on these rumors falls to a new generation of heroes who must brave the dangers of Hollow Mountain, one of Varisia’s most notorious ruins. What secrets await discovery within this sprawling dungeon complex, and is it already too late to halt the return of the Runelords?

It Came From Hollow Mountain is a Pathfinder Roleplaying Game adventure for 5th-level characters. The adventure continues the Return of the Runelords Adventure Path, an exciting continuation of the Runelords saga set in the frontier lands of Varisia. A selection of new monsters, a discussion of Ashava (a kindly demigoddess of lost spirits), and additional encounters in the ruins that surround Hollow Mountain round out this volume of the Pathfinder Adventure Path. 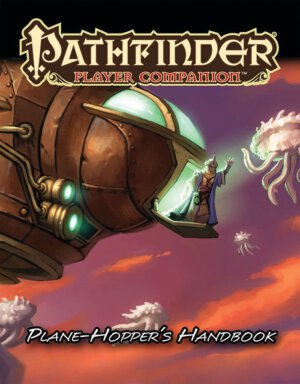 Player characters who venture beyond the Material Plane face great danger—but also can draw great power from these fantastic locales. Pathfinder Player Companion: Plane-Hopper’s Handbook offers player-facing tools for characters who adventure across the multiverse, from the gloom of the Shadow Plane to the fires of Hell to even stranger destinations. Plus, find options for characters whose ancestry traces to another plane, such as tieflings, aasimars, scions of the elemental planes, and more. Discover the wonders that await beyond with the Plane-Hopper’s Handbook! 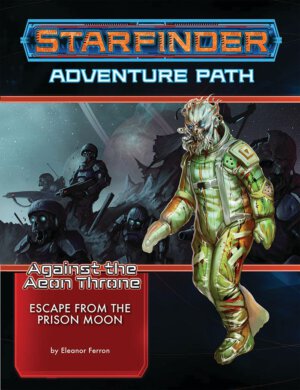 Starfinder Adventure Path: Escape from the Prison Moon (Against the Aeon Throne 2 of 3)

Deputized, by the interstellar police force called the Stewards, to free a colony from Azlanti occupation, the heroes journey to the Azlanti Star Empire to rescue their captive friend from a well-guarded prison moon. After visiting an outlaw space station nearby, the heroes stage a daring breakout and clash against the penal colony’s commandant. But the experimental starship drive is still at large, and the heroes must track it down to prevent the Azlanti from making it operational!

Escape from the Prison Moon is a Starfinder Roleplaying Game adventure for four 3rd-level characters. The adventure continues the Against the Aeon Throne Adventure Path, a 3-part, monthly campaign in which players visit and explore some of the worlds of the sinister Azlanti Star Empire. It also includes an overview of the expansionist Azlanti Star Empire, an article exploring various alien races under the Azlanti Star Empire’s jurisdiction, and a selection of new monsters from alien worlds.