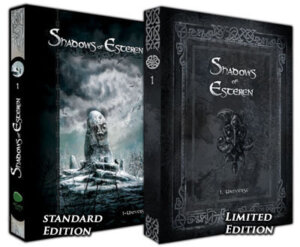 Agate Editions and Studio Two Publishing is following up on the internationally acclaimed roleplaying game, Shadows of Esteren, with a prologue book to set the scene. Shadows of Esteren Book 0: Prologue brings an all new campaign to gamers and, to this point, no one can say where the tale will take you. After only a few days, Agate has well surpassed their initial funding goal.

“Aesthetically clever, close to artistic excellence, Shadows of Esteren is a wonderful game that will delight collectors in particular. As for players and game masters, both will be charmed by the vast universe, the many possibilities, the coherence behind each element, and many other things. Games that show such quality are rare, too rare, and what we can see here is the birth of a new standard in the genre.” ~ French RPG magazine le maraudeur