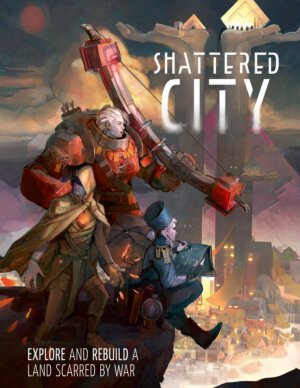 A new science fantasy roleplaying game corebook has arrived from UFO Press. Combining aspects of Legacy: Life Among the Ruins with the setting of Mysthea, Shattered City provides a game where characters will unite various factions in the hopes of overthrowing their city’s occupying army. The 240 page PDF is available right now at DriveThruRPG for $20.00 with a print edition promised by the end of the year.

HUNGRY EMPIRES PAINT NEW BORDERS WITH THE BLOOD OF THEIR CITIZENS.

REBELS IN A TWICE-CONQUERED CITY DREAM OF FREEDOM.

Shattered City is a roleplaying game about occupation and revolution in a fantasy world ravaged by war. Together you’ll build a city and sketch out its wonders and scars. You’ll take the reins of factions working to bring freedom to this city – or the foreign Guild sent to bring it to heel. You’ll make the heroes of this city: bold warriors, civic leaders, and uncanny mystics. And together you’ll tell the tale of this place’s struggle for freedom.

As flashpoints threaten to set the city ablaze, as you fight to pull down the occupying forces or work within their systems to earn yourself prosperity, as you work with the others to find moments of beauty and hope, what sort of community will you build? And what mysteries will you uncover along the way?

TELL YOUR OWN SAGA

Shattered City matches the faction-scale gameplay of Legacy: Life Among the Ruins with Tabula Games’ bizarre and beautiul Mysthea universe to tell a story of empire and rebellion in a crystal-encrusted land. With dozens of character and faction options, pages filled with beautiful art, and tools to help shape your story as it spans years of time, Shattered City has everything you need to play.