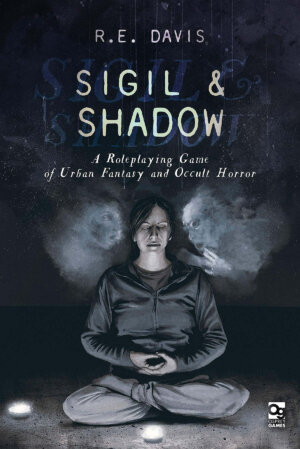 Next month will see a new urban horror roleplaying game from Osprey Games. In Sigil & Shadow, written by R.E. Davis, players will take on the roles of humans and monsters who struggle against ancients terrors. The book will be available in hardcover on July 22nd for $35.00.

Set in a mirror of our own world, Sigil & Shadow is a roleplaying game of urban fantasy and occult horror in which players take on the roles of illuminated heroes and shadowed monsters to face the rising tide of supernatural forces. Ancient nightmares lurk behind the closed doors of board rooms, entities from beyond time prowl the city streets, forgotten rituals are reborn as viral memes. Do you take a stand against the encroaching shadows? Or do you seek their power for yourself?

Powered by the highly accessible d00Lite system, Sigil & Shadow focuses squarely on the story rather than the mechanics – who the characters are and what they do, not how they do it. Easy to adopt to any mythos, campaigns can be built around a wide range of plots, with players taking the role of anything from paranormal investigators and monster hunters to members of occult cabals or secret societies. The setting offered sees a modern world buffeted by the tides of supernatural power, where beings of myth wake from their slumber while modern cults sacrifice to pop-culture gods and ancient cabals pursue their age-old schemes into the digital age.