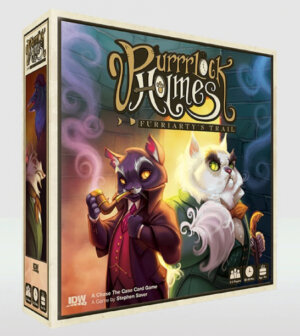 A cute looking deduction game is on the horizon, from IDW Games, as Purrrlock Holmes: Furriarty’s Trail is set for a June release. Players will take on the roles of newly minted inspectors at “Scotland Pound” tasked with tracking down members of the notorious Furriarty Gang. If the game’s apaw the famed detective Purrrlock Holmes must be on the case too!

Purrrlock Holmes: Furriarty’s Trail is designed for two to five players, ages 10 and up, and will carry an MSRP of $24.99.

Furriarty is terrorizing London and it is up to Purrrlock Holmes to stop him before he completes his plans and escapes! However, Purrrlock cannot do it alone and it is up to you, as a newly inducted Inspector at Scotland Pound, to bust members of Furriarty’s gang in order to help Purrrlock get closer to the bewhiskered baddie that’s been bullying all of Baker Street. Get ready Inspector; the case is officially afoot (or a-paw, if you will).