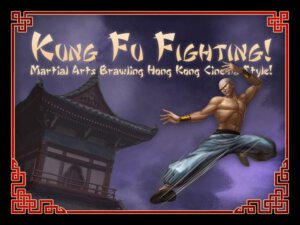 SlugFest Games have launched their new Kickstarter project to bring their title Kung Fu Fighting! back in front of the gaming public. Kung Fu Fighting! (cue Carl Douglas) is a card game for two to six players in which they compete in epic, cinematic style free for alls or team play. Currently the project runs through April 8th and you can receive a copy of the redesigned, revamped title for a pledge of $25.

Kung Fu Fighting is a fast paced, action card game for 2 to 6 players. You and your friends engage in climactic fights right out of Kung Fu movies. Teach them the meaning of pain with devastating kicks and punches. If you prefer, grab a weapon – like a bo staff or the nearest table – and start flipping through the air as you beat down your foes.

When the dust settles will you be the only one left standing? Or will your Kung Fu be too weak?

Kung Fu Fighting is a stand-alone card game with multiple ways to play. The base game is a free-for-all fight where each player is on their own battling for supremacy. Kung Fu Fighting will also come with rules for Team play and Character Cards with unique abilities. Once you get a feel for the game you can add in the Team Cards and Character Cards for more advanced play.

Kung Fu Fighting was our very first game, published back in 2004. It was a fun, exciting game that sold two print runs and one expansion. However, sales of Kung Fu Fighting began to taper off so in 2011, when we sold out for the second time, we decided to not reprint it.

When the game first sold out, there were a few e-mails every so often requesting a reprint, or asking if there are any leftover copies hiding away in our warehouse. People loved the game, but not enough people, and we sadly had to keep turning folks away. We’ve been keeping our ear to the ground, and the number of folks asking for a reprint has been steadily increasing. A lot of folks seem to be ready for the game to come back and we are excited about the possibility of relaunching a title we really loved!

The thing is, the old Kung Fu Fighting was the best game we could make… ten years ago. With everything we’ve learned, we can do better! Since August of 2013 we have been working to update Kung Fu Fighting. Our efforts focused on improving on the game’s core mechanics by making gameplay faster and adding strategy while taking steps to keep the rules light and staying true to the original.