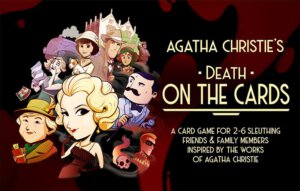 If you’re a fan of the grand dame of murder mysteries classic stories then you’ll be sure to be on the lookout for Agatha Christie’s Death on the Cards. In the new card game, distributed by Modiphius Entertainment, the players will aim to solve a murder all while one in their midst is the evil doer. The game features plenty of references to famed Christie characters and stories too. Agatha Christie’s Death on the Cards is for two to six players, ages 10+, plays in 20-40 minutes, and will carry an MSRP of $19.99 when it arrives in stores this week.

What is Agatha Christie’s Death on the Cards?

A fun card game for 2-6 sleuthing friends or family members with a hidden traitor mechanic and inspired by the works of Agatha Christie.

The players must use their deductive skills to unmask the murderer who hides among them, conspiring to derail their investigations. Recruit the assistance of Agatha Christie’s most beloved detectives — such as Hercule Poirot, Miss Marple, or Ariadne Oliver — to find out which secrets your fellow players are hiding. Investigate, find clues, make accusations and bring the murderer to justice before they escape!

Easy to learn, quick and fun to play in 20-40 minutes, this game will make an ideal Christmas present.

Aim of the game

Players aim to uncover each other’s secret cards in order to discover the Murderer in time to stop them escaping. If at any point a player has all of their secret cards revealed, then they are plunged into social disgrace and lose the ability to play certain cards.

The player with the You’re The Murderer!! secret card wins the game if the draw pile is exhausted and The Murderer Escapes! card is revealed, or if all of the
other players are in social disgrace.

All the other players win if the You’re The Murderer!! secret card is revealed. The killer is unmasked and will be held to account for their crime.