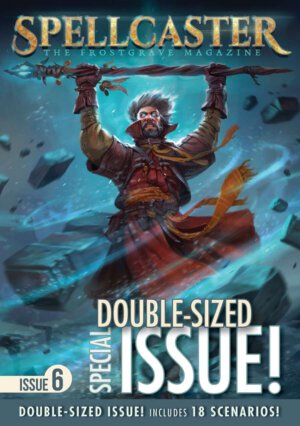 Joseph A. McCullough has released the latest issue of the Frostgrave skirmish miniatures game magazine, Spellcaster. This double sized issue features plenty of new rules and a staggering eighteen scenarios. The 68 page PDF is available at DriveThruRPG for $12.00.

This double-sized issue contains 18 scenarios including:

* Swords Against the Slime Lord – A 4-scenario Frostgrave mini-campaign.

* Standing in the Eye – A one-off Frostgrave scenario.

* The Witch of Mount Gramos – A 3-scenario mini-campaign for Warriors of Athena.

* Giant Tortoises in Ghost Archipelago – Rules for mounts and pack tortoises as well as a solo scenario.

* Eye Demons in Frostgrave – Rules for eye demons, plus a new scenario