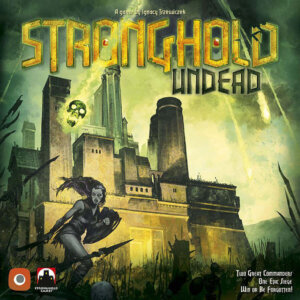 Following a successful Kickstarter, Stronghold: Undead is returning as a standalone title from Portal Games. In this two player game, designed by Ignacy Trzewiczek, the Paladins must defend their castle from the assault of the Necromancers’ legions of undead. The game is for two players, ages 14+, plays in around 90 minutes, and will carry an MSRP of $34.95 when it hits stores August 11th.

Stronghold: Undead is a re-balancing of the original Stronghold: Undead expansion for the second edition of Stronghold that is now a standalone game. It includes a new board with new paths to siege the castle, undead mechanisms, and more ways for both sides to secure their victory!

Stronghold: Undead is a standalone game that takes mechanisms known from Stronghold and uses them in a new and exciting way to tell a brand new story.

In Stronghold: Undead, resource management is of utmost strategic importance, and there is no greater resource than time. Each action taken by the Necromancer gives the Defender more time to prepare.

A powerful undead army, poised to overwhelm any and all resistance, requires a great expenditure of time and resources, which the besieged army in Pearl Keep can turn into stronger defenses. A weaker force, more rapidly deployed and less costly, may catch the fortress unprepared, or it may be stopped by defenses a slightly stronger force would have crushed. Walking this line requires finesse, and the ability to read your opponent.

The invader wins the game if the undead army breaks the walls in eight rounds or less. One area, one wall segment, one break in the defense is enough to enter the castle and win the battle!

On the other hand, the Defender wins if they manage to keep the fortress until the end of the eighth round. The sun goes up and dark forces of Necromancer die at the dawn of the new day!