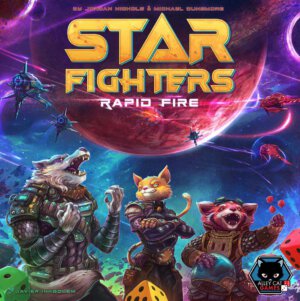 Alley Cat Games will be releasing their real time dice rolling science fiction game Star Fighters: Rapid Fire in Q3. In the game, designed by Michael Dunsmore and Jordan Nichols, players will dogfight each other until one of the spacecraft is destroyed. Star Fighters: Rapid Fire is for one to four players, ages 10+, plays in around 20 to 40 minutes and will carry an MSRP of approximately $49.99 when it arrives this summer.

Star Fighters: Rapid Fire combines the excitement of real-time dice rolling with tactical starship combat. Each player hops into the cockpit of their own starfighter and duels it out in a dog fight to prove who is the superior pilot. The game plays in multiple modes 1 vs 1, 3 player free-for-all, 2 vs 2, or a solo mode where a single starfighter attacks an orbital space station.

In the real-time phase all players roll and re-roll their command dice simultaneously, and assign them to the various functions of their starfighter. When a player has fully charged systems and is ready to act they may end the real-time phase by hitting the big red button and yelling, “Fire!” This means all players must cease rolling and allocating dice and move to the tactical phase.

In the tactical phase players then alternate activating the systems they have charged. This allows them to fire torpedoes or lasers at the enemy, manoeuvre around the map, adjust their shields, and other actions unique to their chosen starfighter.

Players must balance the pressure of real-time play while making good tactical and strategic decisions. The game only ends when one starfighter is destroyed. The pilot that hits the finishing blow gets all the glory and is the winner.