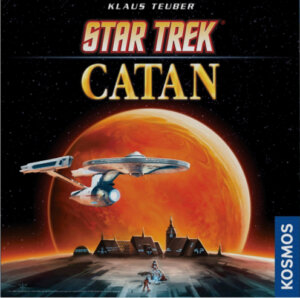 The t’s have been crossed and the i’s have been dotted, and Star Trek: Catan will finally be coming to the good old USA via Mayfair Games. They will be debuting it at GenCon and releasing it in the Fall. Additionally, at the GenCon debut you’ll be able to meet Nichelle Nichols at Mayfair Land at GenCon. Here are the details:

Mayfair Games is proud to announce that Mayfair Games and CBS have certified a license agreement for the publication of Star Trek: Catan, the latest game in best-selling The Settlers of Catan family of board games!

Star Trek: Catan transports the timeless game play of The Settlers of Catan to the final frontier of the Star Trek universe. Designed by legendary Catan creator Klaus Teuber, this game features a randomized game board so the game is different each time you play.

Star Trek: Catan brings the beloved characters of the original Star Trek series to life through a series of support cards. Enlist the aid of ten classic Star Trek characters including Kirk, Spock, McCoy, Scotty and Uhura as you settle and develop worlds necessary for the expansion and survival of the Federation.

Star Trek: Catan previews at Gen Con, Indianapolis in August 2012 (www.gencon.com) and sold exclusively through U.S.A. based Target stores beginning in the autumn.

Mayfair Land, #431 Gen Con this year! Nichelle Nichols is renowned around the world as Lt. Uhura in the groundbreaking sci-fi series Star Trek and the six feature films that followed.

Nichelle will be present in the Mayfair exhibit booth Friday, August 17th, where we will be previewing Mayfair’s brand new game, Star Trek: Catan!