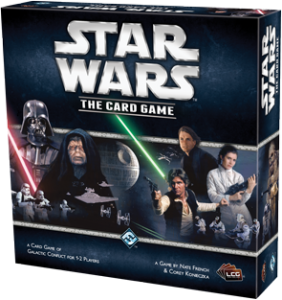 Moving quickly to take advantage of the licensing partnership with Lucasfilm Ltd., Fantasy Flight Games has announced the upcoming Star Wars: The Card Game. The game will be co-operative, with up to four players (no doubt two copies of the title will be needed to provide enough cards for more than two players) representing the rebels as they take on the Imperial forces. New missions packs, or expansions, should be planned for monthly releases. The card game will ship with three missions to get your Star Wars juices flowing!

Star Wars: The Card Game is a cooperative card game that puts 1-4 players* in command of the Rebel strike force and mission team. Players launch fleets of starships and direct some of the most famous heroes in the Star Wars galaxy as they confront the might of the Empire. By working together, players can fend off Imperial assaults and complete their mission, winning the game!

In Star Wars: The Card Game, players take the roles of such notable heroes as Luke Skywalker, Han Solo, and Princess Leia as an Imperial deck opposes their mission attempts with a devious artificial intelligence. With a wealth of characters, starships, missions, and enemies, Star Wars: The Card Game immerses players in galactic conflict set during the time of the original trilogy.

Star Wars: The Card Game offers an innovative, cooperative or solo play experience. Players command different Rebel strategies melded together to embark upon a perilous mission while the Imperials scour space to find and destroy the Rebel base. Each mission is divided into a number of stages, represented by individual cards in a mission deck. Each stage of a mission has a limited window of time during which Rebels can successfully perform the necessary tasks. If they take too long, the Rebels will fail, and the Imperials will win the stage. Each turn, the Imperials move closer to finding the Rebel’s hidden base, making it more difficult for the Rebels to successfully win the final stage, complete the mission, and achieve victory.

During their turns, players pay for starships, characters, and attachments, assigning them to one of four zones. Starships all enter play in the space zone where they form the last line of defense between the Rebel base and the massing Imperial fleet. Characters commit to one of three different zones.

Players are opposed by an Imperial encounter deck, unique to each mission, which follows a plan dictated by a handful of strategy cards. The strategy deck determines the actions that the Imperial forces will take against the players each round, providing the game with a built in AI to run the powerful Imperial military. Each strategy card dictates which Imperial forces strike in the round and which targets they attack. As Rebel and Imperial forces close in for their final conflicts, the tension builds, with each change of Imperial strategy bringing a thrilling new turn of events.