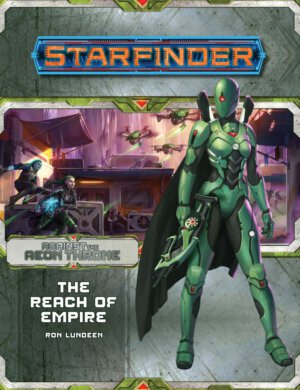 The newest adventure path for Starfinder, Against the Aeon Throne, has begun with The Reach of Empire. The three part path kicks off as the first level player characters aim to free a colony from the iron grip of a tyrannical empire. The 64 page supplement is available right now at the Paizo website and you can score the physical softcover for $22.99 or the PDF for $15.99.

Guerrillas in the Mist

Hired to transport supplies to a fog-shrouded world in the Vast, the heroes discover that a small military force from the Azlanti Star Empire has invaded and occupied the Pact Worlds colony there. The heroes must liberate the settlement from its merciless oppressors, but when they do, they learn that the Azlanti have taken both an experimental starship drive discovered on the planet and one of the colonists—an old friend of the heroes—back to the Star Empire!