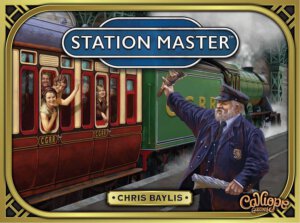 Calliope Games is in the midst of a Kickstarter to bring a new edition of the light railroading card game Station Master to the public. In the game players will look to connect rolling stock to locomotives while also transporting passengers as well. As of this writing, the project is at 65% of it’s funding goal. Station Master is for two to six players, ages 8+, and plays in 30 to 50 minutes. You can reserve a copy of the standard game for a $25.00 pledge or get the deluxe edition for a $30.00 pledge through December 12. Expected delivery is May of next year.

We are thrilled to bring back this classic card game of building trains and managing passengers! Originally published by Mayfair Games in 2004, Station Master has long been favored for its high player interaction, clever decisions, and fun gameplay. We couldn’t think of a better way to continue Calliope Games’ 10 year anniversary celebration than by refreshing and publishing one of our favorite games – so we welcome you to the launch of the new and improved Station Master!

Station Master is a train-themed card game for 2-6 players. In the game, players are working at the station, attaching railcars to Locomotives and boarding passengers on trains, trying to score the most Efficiency Points to win!

We have restored this timeless train game, creating stunning all-new artwork based on classic locomotives, railcars, and railroad history. In addition, we have refined and streamlined the rules for modern audiences, as well as adding in upgrades and new material to create the greatest possible Station Master experience!